The DIY forum is for personal projects (things that are not for sale, not in production), info sharing, peer to peer assistance. No backdoor spamming (DIY posts that are actually advertisements for your business). No clones of in-production pedals. If you have concerns or questions, feel free to PM admin. Thanks so much!
Post a reply
Paul_C

I put it all into an enclosure last night but wired the power supply jack up wrong (too tired, clearly). Came back to it this morning, found the fault and wired in an LED (I was waiting on some LED clips which arrived this morning).

It wasn't the crazy sound I was looking for but as it's the first one that worked I'm going to keep it on the board for a while (it fattens up a couple of other pedals nicely so it will get used). 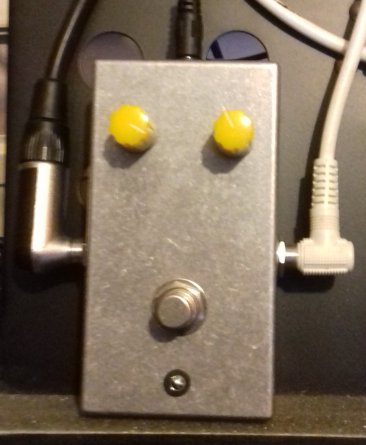 Good job dude, I didn't have time to build an OK last night, but I'll try again tonight. Pretty sure it's verified.
Paul_C

If I get time I'm going to build a Random Number generator later, as it's about the only thing I can build until order some more parts.
Paul_C

I got time, and somehow manage to complete, enclosure and all, a Random Number Generator . . . well, almost.

It works, but not quite as expected

I have a feeling the problem is most likely to be a 10uf polarised cap put in the wrong way round (for some reason the layout isn't very clear which way up it should be so I took a guess).

It's quite entertaining as it is, but I'll swap it round tomorrow and see what happens

I think the RNG is pretty transistor specific/picky as well, if I remember correctly. Been years since I messed with one. Congrats on getting these builds going!
Paul_C

Yes, from now on I'm going to fit sockets for all transistors and buy a selection of them to allow me to swap them about (and retro-fit sockets to the two finished builds too).

I've still not decided on finishes for them, but I've done a little bit of decorating so I know which is which in the meantime.

Paul_C wrote:I have a feeling the problem is most likely to be a 10uf polarised cap put in the wrong way round (for some reason the layout isn't very clear which way up it should be so I took a guess).

The negative should go to the same row as the input

Paul_C wrote:I have a feeling the problem is most likely to be a 10uf polarised cap put in the wrong way round (for some reason the layout isn't very clear which way up it should be so I took a guess).

The negative should go to the same row as the input

That's the way I had it, a proper search through other layouts confirmed it, so I left it alone

At the same time that I order some sockets for transistors, I'm going to collect together the parts to try a Parallel Universe, as something with a loop in it sounds like just the thing for making things crazier

Along with that I'm going to pickup a breadboard so I can test a layout before committing it to a stripboard, and a whole load of other components for future builds and for tinkering

Good stuff man! As you get more components the options for what you can build expand so much, it's a slippery slope..

Some things about breadboards, though - this caused me some proto-confusion haha - if you get those with red and blue power/ground stripes on the sides; where the lines don't connect, the strips don't either, so you'll need to jumper those. Getting a pre-made jumper wire kit is also practical, so you don't end up with a jungle of those pin-wires that possibly came with your board. Also breadboards are naturally a bit wonky sometimes, so if you suddenly lose signal while tinkering with your prototype (and simultaneously playing guitar or having a loop/sequence going) you just might have brushed up against something or a component/alligator clip has come loose. And when you got a good, functional thing on the breadboard, don't get tempted to fix something that seems wrong later in silence. Just hook it up again as-is so you can confirm any changes by ear.

It's good to have sockets, definitely, and a stock of all types of transistors. They can make a big difference sound-wise of course, but I've built some (verified) circuits where I could only get good results with trannies other than the ones recommended. You live in the UK, have you ever ordered from RS Components? That's a good supplier over there, I've ordered from them (to Norway) a few times.
Paul_C

I will have to sit down at some point to work out which is the cheapest place to get stuff, but the numbers I've ordered up until now it hasn't really bothered me.

I still want to get the OK board/s working at some point, I might have a tinker next week by pulling everything off and starting again, testing all the bits as I go, or perhaps try making an audio probe to test the circuit before dismantling.

As things stand my setup has five self-built pedals in it, one Fuzzdog kit (Ampeg Scrambler), two Parasit Studios kits (Raygun Youth and Into The Unknown) and the two stripboard successes.

One thing I want to build is something on the lines of the Barge Concepts VFB-X (a feedback looper) - I built a simple one based on a schematic that appears all over the place, but it doesn't behave anywhere near as well as the VFB-X, which has (IIRC) two buffers in it. I don't think they're made any more so building my own is the only way to get another.
garyg

Paul_C wrote:I've still not decided on finishes for them, but I've done a little bit of decorating so I know which is which in the meantime.

I think they look pretty good anyway, particularly the layering on the text.
Paul_C

Thanks! It's not bad for a quick scribble with a black sharpie and a silver paint pen

I stripped the two DE OK boards down and built an LP with the same bits (because I need to order more parts, but fancied seeing if I could get something to work) - it started off making a sound while on but with no real distortion so I swapped each transistor for one of the left over ones and I managed to get the distortion I was looking for, but it did have a strange glitch just after a note or chord was played while the gain was up high so I gave up until I get more bits and some transistor sockets.

The Sonic Koalas vid I put up was with the two finished pedals doing most of the work, I had my Bakvendt set almost to freeze and a BitQuest ring mod adding a bit of burble after them - it sounded great

So that's the next project, then I might look back at the OK/LP saga and see if I can make something that works . . .
digi2t

Paul_C wrote:More checking this evening and nothing obvious found, so I decided that as I've got lots of parts I'd make another board, as the practice would do me good.

The only thing I changed was a 2N2222 for the 2N2907 (more out of curiosity than anything else) but to save time I wired it up to the existing off-board wiring.

So based on that I'm going to redo all the off-board stuff and see if that's where the problem is (as seems likely), sit tight for the update where I confess which foolish mistake I made